Find out how the architects for a Second World War Nissen hut in Cultybraggan Camp secured this temporary building’s longevity by using innovative construction materials.

One of 80 huts in a former prisoner-of-war (POW) camp in Perthshire, this hut has been refurbished as a visitors’ centre. Originally conceived as a temporary building, this 70-year-old structure has been secured for another generation using innovative construction materials.

Download this case study to take away key learning and project information from Cultybraggan Camp’s hut one.

Completed in 1941, Cultybraggan is one of the best-preserved, purpose-built Second World War POW camps in Britain. It functioned as a high-security camp until 1947 and has 80 ‘Nissen’ huts. Subsequently becoming a British Army training camp, it was decommissioned by the Ministry of Defence in 2004.

A Nissen hut is essentially a metal tent with a brick wall on either end, designed to fit on a single truck and be erected quickly.

The aim of the project was to demonstrate how recycled and natural materials could be used to insulate existing buildings and provide a temporary small visitor centre. It exhibits both the heritage and low carbon future of the site.

The project has transformed a cold and uncomfortable building into a warm, attractive, useable space. Previously, the space could not be heated sufficiently to make it comfortable. It can now be heated throughout the year with just one 2KW electric panel heater.

Since its refurbishment, hut one is now a visitors’ centre.

Our involvement in the project

We worked alongside Comrie Development Trust, with funding from Greener Scotland, to refurbish this Category B listed Nissen hut.

We also provided some funding for the project. This enabled John Gilbert Architects to work on the project and secure many of the innovative materials that have been used.

Process of the build

The first priority for John Gilbert Architects was to ensure the conservation and extension of the life of hut one. This included replacing rotten timber and insulation, replacing windows, fixing external fabric, carrying out work to the front and back walls, and replacing the electrics.

The second priority was to improve the building to create a warm and functional space by insulating the structure for the third time.

The aim of the project was to demonstrate how a Nissen hut could be upgraded, insulating the structure for the third time to create a warm and functional space. The Nissen huts were originally insulated using straw. Following the Second World War when Cultybraggan became an army camp, this was replaced with spray-foam insulation.

They will also lock away up to two tonnes of CO2 for every tonne of hemp harvested. Recycled cotton insulation, which is made from cotton textiles diverted from landfill, contains no chemical irritants and requires less energy to manufacture than conventional insulation.

And rigid wood fibre insulation has been used under the floor and fitted externally to the front and back walls of the hut. External walls have render applied directly to the wood fibreboard to make a new, warm waterproof skin. 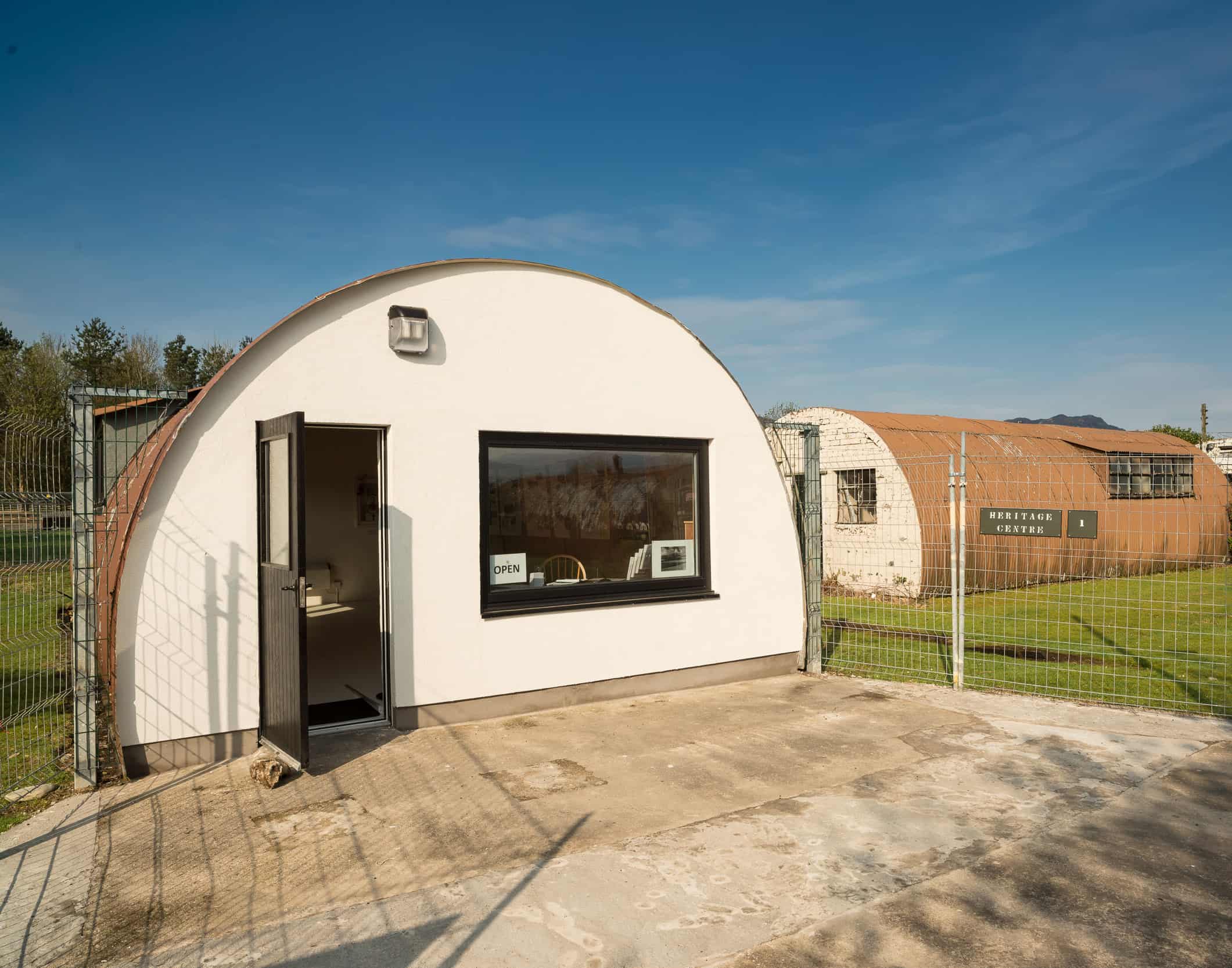 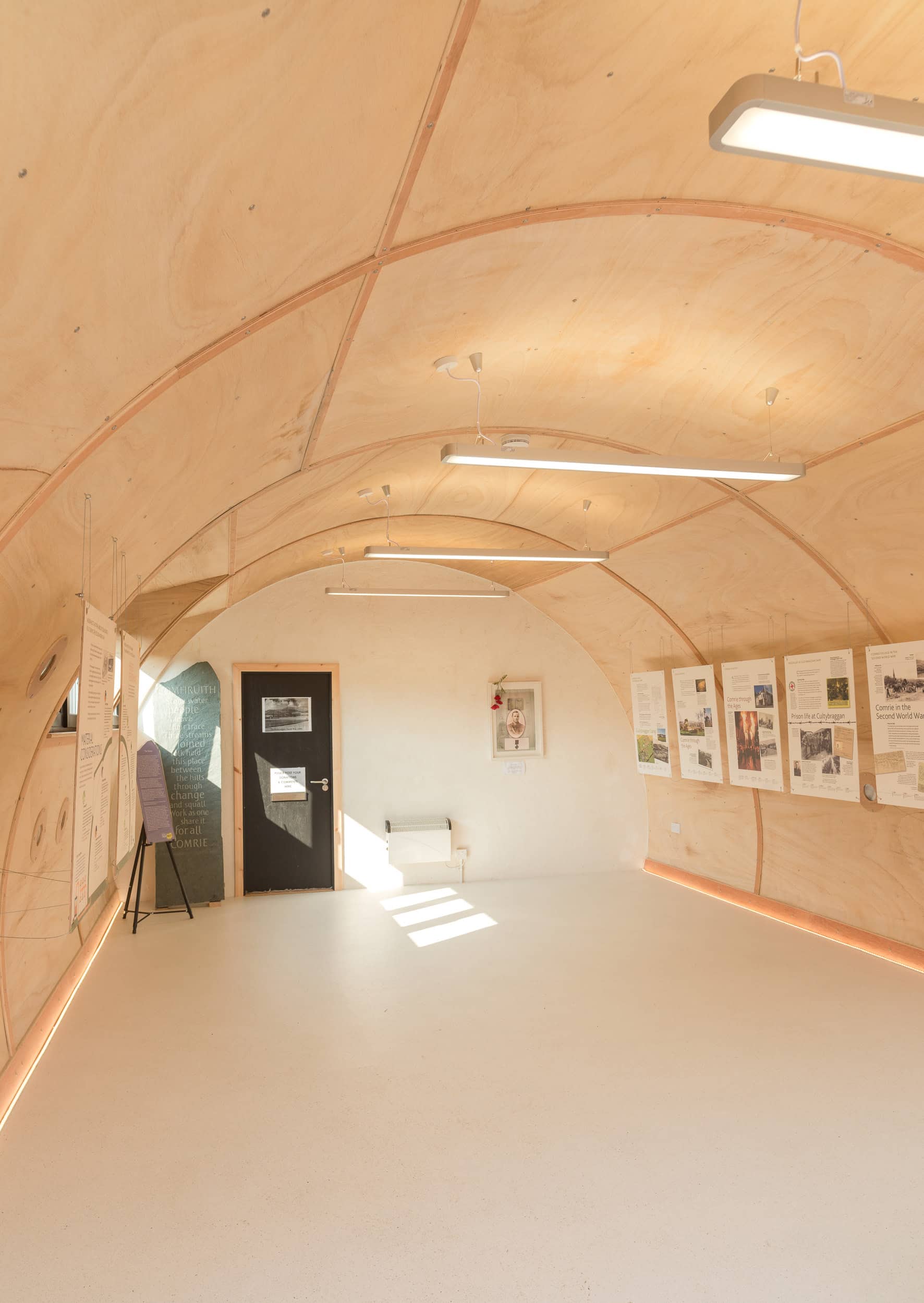 The huts were previously very draughty. In hut one the windows, doors, walls and floor were draught sealed. Hut one has been fitted with airtight membranes to the walls and floor, which prevent damp and provide an airtight layer.

Natural materials with low embodied energy have been selected to work in harmony with the existing materials of the hut. Use of timber has been prioritised through new, high-performance doors and windows with new timber linings and wood fibre board for insulation.

The internal metal lining of the hut was replaced with flexible plywood, providing some of the structure and a beautiful internal finish. The plywood is from a sustainable source and coated in an organic flame retardant.

The paint components used in hut one come from environmentally managed sources and are produced in a sustainable ecological cycle. They are low in volatile organic compounds. Much of the organic linseed oil used in the paint is grown close to the factory.

The clay plaster used helps to moderate the internal environment and absorbs humidity. The floor finish is a non-slip vinyl and 45% of the product is from recycled materials, manufactured using renewable energy.

The lessons learned from hut one will be translated into action on the other huts in Cultybraggan Camp. The process of refurbishing hut one has served to provide information on the construction of the Nissen huts and the priorities for retrofit work.

By taking on this project, the architects have examined how to ensure a more economical refurbishment in the future, allowing them to evaluate which interventions make the most significant differences.

A library of sustainable building materials

Our website includes a web-based resource that showcases sustainable, traditional, innovative, recycled and low carbon building materials. If you are looking for inspiration or information on different types of materials to consider for your project, visit our materials library.